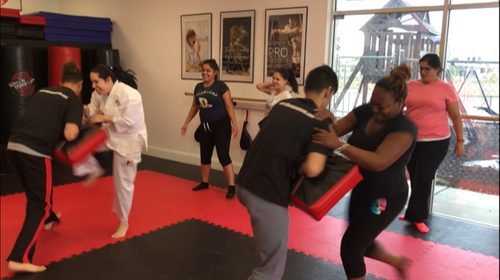 Any form of martial arts will teach amazing combat and life skill sets to any gender. But, there are a few martial arts that are popular among women. Learn more!

You’ve probably heard time and time again that men are stronger than women inherently. While that may be the case, there is a whole community of amazing women who practice martial arts, who have shown that they’re stronger than some men. These women prove to the world that they are strong warriors, and their gender and sex have nothing to do with it.

While women don’t need a specific reason to start martial arts lessons, many women pick up the sport after becoming interested in learning self-defense skills. It’s no surprise that in a world where some men think that women are weaker, those men think they can attack and abuse “helpless” women. And because these embedded stereotypes don’t seem to be changing any time soon, women have taken it upon themselves to learn how to use self-defense in case they come across an attacker.

Early on when women were learning self-defense, classes typically were taught by mimicking real-life situations, teaching women how to stop an attack or fight back without getting injured. However, just like the U.S. servicemen who were introduced to Karate while stationed in Japan during WWII, people realized that martial arts are an amazing form of combat training.

Any form of martial arts will teach amazing combat and life skill sets to any age or gender. Self-defense aside, women should consider signing up for martial arts. But, there are a few martial arts that have been very popular among women, especially for this reason.

Lately, Muay Thai has become a martial art favored by women. Muay Thai is seriously good at burning calories; it’s an excellent exercise regime that helps shed fat and tone the body. You’ll also increase flexibility, build razor-sharp reflexes, learn to master unbreakable concentration, and so much more. Muay Thai is a great way to learn a variety of self-defense moves and to also build up a stronger mindset. Learn more about Muay Thai.

Sign up for Muay Thai classes at American Karate Academy!

Similarly to Muay Thai, Kick Boxing is very effective at burning calories and building discipline, making it a very attractive martial art for women. Learn how to correctly punch and kick in situations where you may need to defend yourself with kickboxing classes. Soon, you’ll have a wealth of practical and effective self-defense techniques — all from learning kickboxing! Learn more about kickboxing.

Sign up for Kickboxing classes at American Karate Academy!

While the name itself is simply Mixed Martial Arts, MMA classes are specifically designed to teach the participants a variety of martial arts synonymously and practically. MMA classes will teach traditional martial arts and self-defense techniques that can be applied to real-world scenarios, if the time may come. The best part of MMA training is the self-discipline you will learn. You’ll soon be able to control your inner energy and emotions, which can be useful against an attacker. While we wish nobody was attacked ever, it happens, and we hope that you’re able to fight and disable your attacker, not flee or end up getting hurt. Learn more about MMA.

Sign up for MMA classes at American Karate Academy!

Martial Arts and Self Defense in Miami

As we said before, any woman would benefit greatly from learning any martial art, but the ones that we’ve seen to be most effective at teaching self-defense and discipline include Muay Thai, Kick Boxing, and MMA. Women are warriors. With a little bit of extra training, women can be stronger, level-headed, and intuitive in dangerous situations. At American Karate Academy, we offer a variety of martial arts classes in the Miami, Florida area. We even have a more traditional self-defense class. We offer classes for all sexes, genders, and age groups, so don’t be shy! Contact us to sign up for classes today!