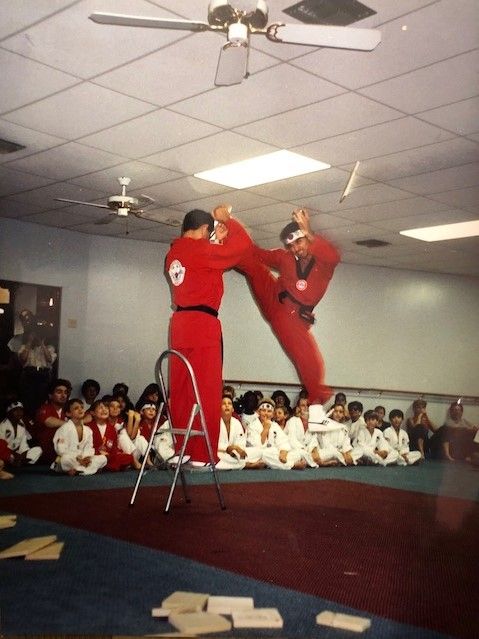 How Karate Came To America

Karate is one of the most well-known martial arts to most Americans. But how did it come here? Learn more and sign up for classes at American Karate Academy.

Karate is one of the most well-known martial arts to most Americans. But how exactly did it end up coming to America? And what made it so popular? In this blog post, we will review a brief history of karate and how the martial art came to and rose in popularity in America.

Okinawa is a set of southern islands that is part of Japan. Over time, Okinawans developed a slightly different culture than compared to the Japanese living on the northern, mainland islands. This is apparent in many ways, especially in their dialect. In an unknown year, long ago, the Chinese came and visited Okinawa. It was then that they introduced Okinawans to Chinese combat techniques. To honor the Chinese who showed them, Okinawans named their new combat skills karate, originally translating to “Chinese hand”. As you may know, this translation has been shifted over time and even the Japanese refer to karate as meaning “open hand” now.

1924: Karate Comes To The Mainland

Karate is finally brought over to and popularized in mainland Japan in 1924. The very first Karate Club is created at Keio University in Tokyo. Many young adults are starting to become interested in learning karate. However, at this point, only Japan knows about and practices karate formally.

During World War II, many United States servicemen were deployed to an Okinawan base. While the Japanese were the enemy at the time, they still took the time to introduce the soldiers to their prized combat technique, karate. The U.S. servicemen understood what made karate different — discipline. The soldiers were eager to master karate and bring it back to the states to teach others about it.

Often called the godfather of American Karate, Robert Trias was one of the aforementioned servicemen that learned karate techniques while deployed in Japan. When he arrived back home, he opened the very first karate school in the United States in his hometown of Phoenix, Arizona. The school was a small success, but in an attempt to promote the sport further, he founded the United States Karate Association (USKA) in 1948. From then until 1999, the USKA helped set up and promote karate across the country. They even held the first karate tournaments. While the USKA was defunct in 1999 and replaced by the USA National Karate-do Federation under the governing body of the Olympics Committee, a lot of the rules and regulations that Trias set still remained.

In 1959, Americans fell head over heels for the amazing martial artist Bruce Lee when he made his first debut on the big screen in the United States. His carefully articulated and seemingly impossible combat skills blew Americans away, causing a wider audience to become interested in martial arts, but especially karate. Following Bruce Lee, were many other great martial artists who got the opportunity to show off their skills on camera and quickly became household names. Honorable mentions include Jackie Chan, Jet Li, and Donnie Yen, but of course, these are just a few examples, all of whom were influenced by Bruce Lee himself.

“Wax on...wax off.” Actor Ralph Maccio’s most famous role was as the titular Karate Kid. If you were a kid growing up in the eighties, you’ll likely remember the story of the bullied new kid, Daniel, who learns how to stand up for himself by learning karate from an old car mechanic, Mr. Miyagi. The Karate Kid was a huge hit and it introduced a new generation of Americans to the world of martial arts. Kids all over the country were suddenly begging their parents to sign them up for karate classes. But more important than combat, in the film, we saw Mr. Miyagi teach the importance of discipline and having honest morals. This movie was great at promoting karate as it showed kids and parents of the day that the martial art is so much more than just combat.

Today, there are over three million karate students in the United States. Plus, in every major city, there is at least one karate studio. Karate competitions and tournaments for all ages and genders are held all around the country, and the sport has officially been added to the Olympics.

Well, are you ready to start learning karate? If you live in Miami, register for karate classes at American Karate Academy. We also offer other martial arts classes including MMA, kickboxing, women’s self-defense, boxing, and Muay Thai. We have classes for everyone—from our Little’s Dragon’s program for kids aged four to six, to our adult’s program—because we think everyone should get the opportunity to learn this amazing sport. Contact us to sign up for classes today!